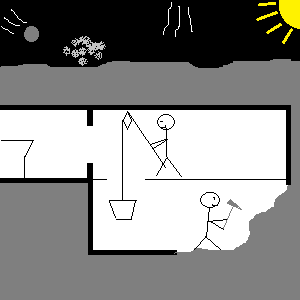 The Shielded Pressurized Oxygen Resource Extraction (SPORE) project is my attempt to come up with a better way for Homesteaders (Lunar and otherwise) to extract the resources they need from their local environment and to create habitable space. For Lunar Homesteaders this would mean dealing with the regolith and the underlying mega-regolith.

In biology, a spore is a one-celled, reproductive unit adapted for dispersal and survival for long periods of time in unfavorable conditions. Like a spore, humans can take the SPORE technology and techniques anywhere in the solar system (which is pretty hostile to Earth life) and establish a Homestead. Using SPORE, they will be able to safely extract the resources they need while simultaneously creating critical habitable space.

I was working on the regolith characterization of Phase 3 of my Lunar Iron Project, Lunar Regolith Moving Equipment, when I realized something. Three things actually.

The SPORE concept will constantly evolve. Check out the SPORE Outline page for the most current information. Please let me know if you see something here that doesn’t look right and I’ll update it. I’d also love any feedback (positive or negative) or suggestions in general. Thanks.

Lunar mining operations conducted inside a sheltered and pressurized structure can mitigate or eliminate all of the challenges presented by Lunar surface operations.

If Lunar surface operations are so dangerous and challenging then I should find a way to avoid them. List as many problems as I can find, find ways around each one, and figure out how to put the solutions together in a way that makes sense and doesn’t create even bigger issues.

Many of the challenges associated with Lunar surface mining (and operations in general) exist because the equipment and/or personnel are exposed to open space on the surface. They would be a lot more efficient (and protected) if we could put a shield between them and the sky. They would be even more protected if that shield had a significant amount of mass on top of it.

The shielding component is pretty straight forward. This is the dodgy bit. The thought is to pressurize the mining area with pure oxygen recovered during the refining process. As Luna is primarily made up of oxides, we’ll probably end up with more oxygen than we need.

The primary Lunar resources are contained in rocks and regolith. That’s where we are going to find the iron we need for habitats and tools and the oxygen we need to breathe. These resources come in three very general flavors:

Alright. We now have a shielded and pressurized structure. It’s a lot safer and more comfortable than mining on the Lunar surface. Now we have to remove the regolith and mega-regolith from the enclosure and move them to the processing equipment. There are several ways we can go about doing this.

SPORE operations could continue even when the Homesteader are mining horizontally thorough the mega-regolith. It won’t be like mining through solid rock. They’ll still need to construct walls to support the material above and iron pressure hulls to house people and equipment. Eventually larger settlements could reach solid rock. Maybe then they can carve living spaces directly out of the rock. Until then, SPORE will allow them to create surface and subsurface living spaces as well as extract critical resources. All while being safely protected from the hostile surface environment.

SPORE at a glance – No frills description.

SPORE Project Outline – Details what I’ve learned and what I still need to work on.

SPORE Project Goals – The goals of the project.

SPORE Project Updates – All the updates I have posted.