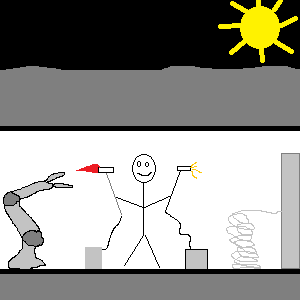 I was reading the Open Source Ecology (OSE) website and it got me thinking about what industrial machines a small-scale Lunar Homestead could use.

The mission of OSE (www.opensourceecology.org) is to create an open source economy where everyone has access to the knowledge on how to build anything themselves. Their current project is to develop a set of open source blueprints for the Global Village Construction Set (GVCS) – a “modular, DIY, low-cost, high-performance platform that allows for the easy fabrication of the 50 different Industrial Machines that it takes to build a small, sustainable civilization with modern comforts”. This sounds like a fantastic idea. Some of the GVCS could be applicable for Lunar Homesteads.

The GVCS concept is very similar to my idea of Lunar Homestead Kits. Future Homesteaders purchase a “Kit” containing all the tools, materials, and designs they will need to build and expand their Homestead. They do all the hard work of making it happen.

Wow. There’s more overlap than I had originally thought. I’ve added these to the list of things we need to develop.

Open Source Ecology is doing interesting and valuable work; and some of it could directly benefit Lunar Homestead. I’ll definitely keep an eye on their progress. Maybe there is a possibility for some future collaboration.

I recommend poking around their website. It’s full of interesting stuff. You might even be inspired to join, donate, attend a workshop, or build something.