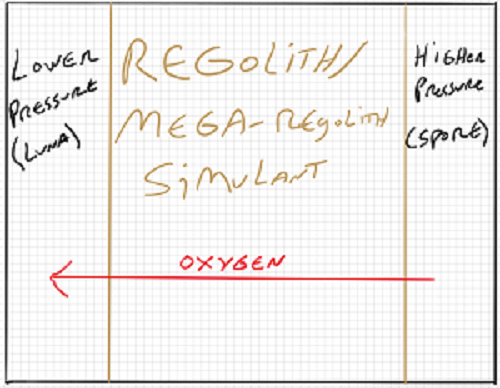 The first thing I need to determine is how much oxygen will be lost through the exposed Lunar regolith and mega-regolith in the SPORE unit. We need to be able to keep it to some acceptable minimum otherwise SPORE just won’t work.

There are some major challenges though:

The solution to these challenges is to focus on the design and implementation of the SPORE system, not on making it work under an artificially constrained set of parameters (such as a particular regolith sample). A clever design is the key to making SPORE practical.

The data from this, and other, experiments might have limited value for building actual SPORE prototypes. However, the data could be useful for creating a “Proof of Concept” paper (or two). I won’t know until I try.

As a bonus, data from this experiment could also be useful if we tried to dome and pressurize a Lunar crater. I’m not sure WHY anyone would want to do that when subterranean settlements offer more advantages and fewer disadvantages. But we should keep our options open.

Ideally, SPORE will be usable on Mars, asteroids, other moons, and nearly anywhere else we want to start a Homestead. Sure, each environment will be different so we’ll need to adapt SPORE to fit those particular conditions. But the overall concept should work nearly everywhere. Sounds like more experiments are needed. 🙂

For SPORE Pressure Experiment 1, the following material will be used to “simulate” Lunar mare basalt:

We know next to nothing about the Lunar mega-regolith. And what little we do know comes from remote sensing and modeling.

Since this is the first experiment, I’m going to use pressurized air instead of pressurized oxygen. This will reduce the cost and complexity of the experiment. It will also be less hazardous.

Conducting this experiment in a vacuum (to simulate the Lunar environment) would be extremely expensive and difficult. Instead, I’m going to simulate the pressure difference between the Lunar surface (assuming that the voids in the regolith are also a vacuum) and the inside of the SPORE area by increasing the internal pressure by the same amount. I might use a vacuum pump for experiment 2.

I’ll run tests with the following range of pressures:

For this first experiment, I’m not going to control for temperature or humidity. I’ll document these values though.

The maximum dimensions of the experiment are 210 cm long by 70 cm wide by 230 cm high. That’s so it can fit through the door to the balcony where it will be stored (part of the fun of doing research while living in a small apartment). The entire experiment will be enclosed in plywood to protect it from the elements (outside storage).

The pressurized container holding the regolith simulant will have the following dimensions:

I haven’t determined how the simulant will be secured or what material the container will be made of yet. 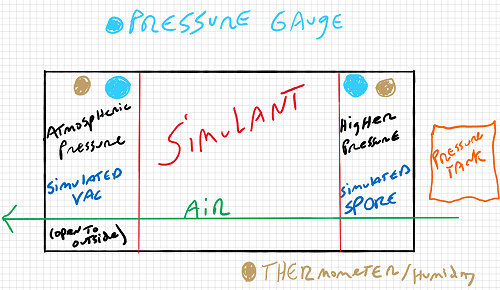