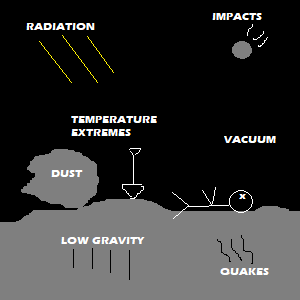 Some people (I doubt it’s many the way Lunar settlement research has been funded) are working on how we can safely and efficiently gather the Lunar regolith from the surface and process it into useful items. Everything I’ve read focuses on robots doing the job as the surface is too dangerous for humans to spend a lot of time mining on it. I’ve decided to list all the challenges of Lunar surface mining that I can find. Not to see how our current technology stacks up (rather poorly I bet) but to maybe come at the problem from a different angle.

Most of these challenges also apply to Mars, asteroids, and almost any object we to extract resources from. The details will change (probably not a lot of regolith dust on Europa) but much will be the same. Figuring out how to avoid these problems (or mitigate them) will let us mine almost anywhere in the solar system.

Lunar dust is a major challenge that we are still struggling to adequately deal with. Most people think of the vacuum, radiation, or meteoroid threats as being the most dangerous. And they are. But if we can’t get a handle on the Lunar dust we may never have permanent Lunar settlements.

So, what’s the big deal about some dust? The Lunar dust is different from Earth dust. The particles are as fine as flour and as sharp as glass shards, which is basically what they are (along with jagged rock debris). The dust particles were created by micro-meteoroid impacts over millions of years. Each time an impactor hit the Lunar surface it shattered the material. Since Luna has never had flowing water or wind on its surface, the edges of the particles have never been worn down. They are just as sharp as the day they were created. An Earth analog would be fine-grained slag or volcanic ash (1, pg 34).

Besides being sharp, the Lunar dust is also very fine (anything less than 80 µm). Any sample of Lunar regolith can consist of up to 20% of particles less than 20 µm in size (3). The human eye can’t even see things below 40 µm (4). The Lunar Sourcebook has the mean grain size at 45-100 µm (similar to silty sand)(1, pg 34) and the  average soil sample particle size at 70 µm, meaning approximately half of the soil by weight is finer than the human eye can resolve (1, pg 478). That’s still not good if you breathe in a cloud of the stuff.

It’s not just the Lunar dust that is abrasive. The process that created the dust, referred to as impact gardening or space weathering, created all the other particles in the Lunar regolith. Impacts of varying sizes and energies have shattered, buried, exhumed, fused, and transported the regolith since the Lunar surface formed. With no air or water to weather them, all the regolith particles are sharp and jagged. Anything in contact with regolith is going to need to be very durable and most likely replaceable. Things like mining tools, tires/treads, space suits, and equipment/facilities buried under regolith are going to be especially vulnerable.

Vacuum is the first thing most people think of when they think of Lunar dangers. There’s no air to breathe! Everyone will be sucked out of the habitat! Their eyeballs will pop out and they’ll instantly freeze! Relax everyone.

Without a strong magnetic field and a thick atmosphere Luna is awash with radiation. Anything not under shielding will be directly exposed. And space suits provide the barest of protection against anything except ultraviolet radiation. That’s a major reason why the Homesteads have to be under at least 6 meters of regolith shielding (10).

I’m not going to go into detail here but the types of radiation we need to worry about are:

In the case of the high energy particles (from CMEs or GCRs), too little shielding is worse than none at all. These particles hit the shielding particles and cause them to start moving fast (think about using a pool ball to set a bunch of other balls into motion). Now you’ve got a shotgun blast instead of a rifle bullet. All those secondary particles are going to cause much more damage than the original particle if the shielding isn’t thick enough to stop everything. That’s why we need so much regolith over the habitats.

Excessive radiation exposure can damage or kill cells (that’s what causes cancer or kills). Our robotic companions aren’t safe either as radiation can also damage electronic components. Planning on simply bringing people and equipment in if a radiation event threatens isn’t practical either. We may not get a lot of warning when a solar event occurs. It may be impossible to shut everything down and get it safely under cover in time. GCRs and the solar wind are present all the time.

Fortunately, the larger impactors don’t come along very often. It’s estimated that a piece of equipment or facility on the surface will be hit by a 1 milligram mass every year (1, pg 46). One milligram (10-3 grams) doesn’t sound like much until you factor in that it’s moving at 13-18 kilometers per SECOND (1, pg 45). That’s a lot of kinetic energy! Enough to create a 500 µm crater in metal (1, pg 46). The probability of a 1 gram meteoroid striking an astronaut or piece of equipment is about 1 in 106 or 108 per year it’s exposed (1, pg 46). A 1 gram meteoroid could make a centimeter deep crater (1, pg 46). That could cause significant damage to a piece of equipment or a habitat. And ruin a surface worker’s day.

The odds are pretty low that a Homesteader will get hit by an object big enough to be a threat. But it’s not zero. And some of us have pretty bad luck.

Luna experiences significant temperature changes because it lacks a substantial atmosphere. The mean surface temperate during the day is 107º C during the day and -153º C during the night (1, pg 28). But that doesn’t tell the whole story. Temperatures can swing between 123º C and -233º C (1, pg 28). Obviously that would kill most living things. The problem is that it’s not good for electronics or machinery either.

Almost all of the heating comes from the Sun as Luna lacks an internal heat source (6). How much energy a particular location receives depends on its latitude and relative position to the sun. Equatorial sites out in the open will get the hottest while polar sites inside the permanent shadow of a crater will be the coldest (which is why there could be ice trapped there).

There’s a lot of math involved in figuring out how hot or cold a place can get (check out the Lunarpedia entry to see some). For our purposes here it’s enough to know that equipment, robots, people, and facilities that are exposed on the Lunar surface will need to be designed to handle a significant thermal range.

A Lunar “day” is 14 Earth days long. So is the Lunar “night”. Peter Kokh of the Moon Society used the terms “dayspan” and “nightspan” for each 14 day period in his Moon Miner’s Manifesto newsletter. I like it so I’m using them also. The reason for such long periods of light and dark is that Luna is tidally locked with Earth. The same side of Luna always faces the Earth because it takes the same time for Luna to rotate around its axis as it does to orbit Earth.

This presents three significant problems for our Lunar surface miners:

The gravity on the Lunar surface is 1/6 that of Earth’s (1.62 m/sec2 vs 9.81 m/sec2)(1, pg 28). This is a huge advantage for our Homesteaders as it takes a lot less energy to get into orbit. This easy access to space means that Luna could become the center for the settlement of the solar system.

However, there are two primary issues with the low Lunar gravity (not including all the possible health issues):

This isn’t a threat or a hazard to our Homesteaders. But it is a big complication for resource extraction. Because of the way it was formed, the regolith is one big heterogeneous mess. Agglutinates, various mineral fragments, glass, highland anorthosite, mare basalt, free metallic iron, and more are all mixed up and unevenly distributed throughout the regolith. The regolith contains particles from very fine dust to large rocks. There’s variability between sample sites, within sample sites, and within samples.

Our equipment can’t be finicky.

We’ll need to also process large chunks of bedrock eventually. Regolith has its use but the real goal is to mine and process the underlying bedrock (mare basalt or highland anorthosite). There will be less variability than regolith, the mare basalt has a significant amount of iron in it, and there is just more bedrock than regolith in general. Plus, we can dig down into bedrock to construct our Homesteads, towns, and cities instead of huddling under regolith blankets on the surface. Imagine a Lunar Khazad-dûm. 😉

I remember reading about how the jaggedness of the regolith helps it lock together, making it more difficult to dig into. I’ll need to find some actual documentation though.

Moonquakes have been recorded reaching 5.5 on the Richter scale and lasting more than 10 minutes (2). The Lunar Sourcebook places the largest recorded moonquakes at magnitude 4 (1, pg 39). That’s still a significant amount of energy. Unfortunately, we only have recordings for 8 years and larger quakes just may not have happened during that time period (1, pg 39). Plus, no human has ever been on the Lunar surface when a moonquake occurred. We really don’t know what to expect.

Surface mining operations could be significantly impacted by even “small” moonquakes because:

While not as obvious as vacuum and radiation, moonquakes could be almost as big a challenge. Especially since we don’t know much about them.

Luna is between approximately 363,000 km and 405,700 km from Earth. Early Homesteaders won’t be able to receive help quickly. And they won’t be able to go home if something bad happens. It could take 3 days or more to get supplies to a Homestead even if a rocket was on the pad and ready to go. Heck, it takes 1.3 seconds for a radio signal to go from Earth to Luna. Try having a phone conversation with a 3 second delay between responses. It’s significant. Homesteaders are going to have to be able to deal with issues on their own. OK, hopefully they can get long-distance technical and moral support from Earth (if their radio is still working).

The top layer of regolith contains a not insignificant amount of gas not present in the Lunar rocks. Some of this gas (hydrogen, nitrogen, carbon, etc.) will be critical to maintaining and expanding the Homestead. Some of it will be important to industry (helium 3, argon, etc.). So we’ll have to design our mining equipment to scavenge the gas before it escapes into the vacuum.

The need for advanced robotics

We must limit the time humans spend on the surface because it is so hostile. The current paradigm is to use really complex and expensive robots to do the job. And because these robots have to operate without a human nearby to fix them, they have to be super reliable. They also need to be at least semi-autonomous to account for the time delay between commands. That means lots of designing and testing. And spending a lot of time and money. It’s obviously very hard to do as we still haven’t had a single mining robot actually land on the Lunar surface.

These are some serious challenges. That’s why I’ve come up with SPORE.