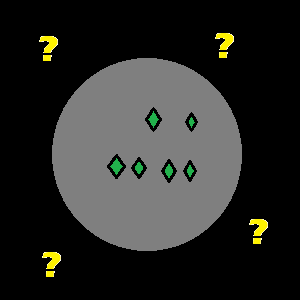 This document was created before I thought of SPORE. It’s not needed now.

The first step in Phase 3 of the Lunar Homestead Lunar Iron research project is to decide on where we would go to get the most iron in the fastest time. This isn’t necessarily the best site for a Homestead but it should be the best site for iron extraction, since that’s what we’re interested in this project.

The reasons why we should focus on a single location are:

So which Apollo site should we focus on? Let’s go back to Phase One and compare the sites.

Free metallic Lunar iron is the first type of iron we should be looking for. It should be the easiest form to extract from the regolith and to refine into usable iron. Remember, FeNi metal particles are found in concentrations of less than 1% (by weight) everywhere (2, pg 160). The key is that most of this iron (the nanophase component) is found in agglutinates. Iron fines make up such a small percentage of regolith that it’s not worth hunting for them (we’ll use them when we find them). So we need to look for agglutinates.

Agglutinates are also important because they can trap solar wind gases that our Homesteaders need (3, pg 439). Some may even contain water. We’ll need to incorporate ways to capture these gases when we process agglutinates for iron. But that’s a future challenge, once we figure out how to make containers for those gases.

Which Apollo sites have the highest concentrations of agglutinates? Agglutinates make up 5% – 65% of the Lunar soil, with an average of 25% – 30% (1, pg 298). So we can get agglutinates everywhere. What we’re looking for is that one place where we get the most agglutinates for the least effort.

We’re looking for mature regolith. The more mature a soil is (meaning the longer the soil is exposed to space weathering), the higher the agglutinate content (4, pg 267). But not just any agglutinates. Agglutinates are a complex mixture of nanophase iron, glass, AND mineral particles broken from the surrounding rocks. We’re going to want mineral particles that contain the highest amounts of iron. Plus, more iron is formed during agglutinate formation when the surrounding rocks are iron-rich.

So we’re looking for places that are rich in ilmenite and have an abundance of agglutinates. Olivine, spinel, and pyroxene are also important but we won’t move on to those until we’ve mastered free metallic iron and ilmenite.

A Global Lunar Landing Site Study to Provide the Scientific Context for Exploration of the Moon gives the following data:

Where is the most ilmenite?

What does all this mean? First, you can see that the numbers are all over the place. The Lunar regolith is a really complex mix. The numbers aren’t going to help us much. So, what can we deduce from this data? Mare basalts are where we want to look for ilmenite. Highland rocks just have less iron and less ilmenite.

Great. That leaves us with Apollo 11 and 12. To narrow it down further let’s look at some Clementine data. 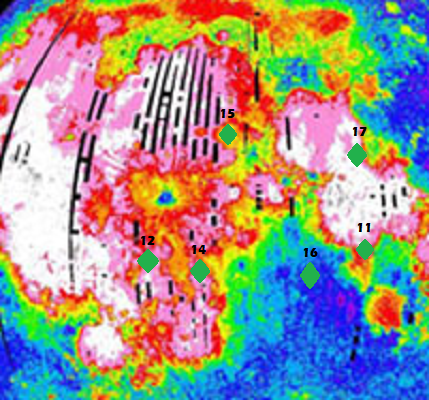 I’ve cropped and blown up the Clementine data image and added the Apollo landing sites. I did this by hand so please don’t get all twisted if you think I should have moved a certain diamond a smidge to the left. This wasn’t meant to be exact. I also kind of regret using a green diamond. I thought I was being clever (tying it into the LH logo) but all I did was make it a little harder to read. Oh well.

What does this image tell us? Three things:

How does the Lunar Prospector data compare to the Clementine data? Lunar Prospector used a neutron spectrometer to gather mineral data while Clementine used spectral reflectance (7). Apparently the two data sets correlate well (7). I recommend reading the paper (resource 7) if you’re interested in the science and math behind the conclusion. It’s really interesting. The main thing we need to know is that the researchers achieved several correlation coefficients, depending on the region they were looking at.

Another paper (source 9) states that the Lunar Prospector gamma-ray spectrometer data also supports the neutron spectrometer and Clementine data for iron oxide distribution. The paper is pretty technical but a cool read. One thing to note is that the aluminum and iron spectral lines are very close to each other. This means that high concentrations of aluminum can read like high concentrations of iron. Something to look out for. 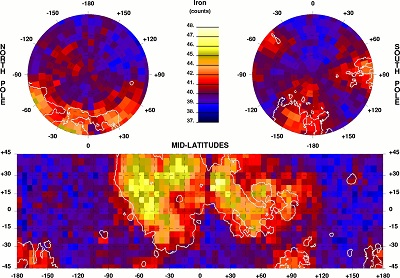 This is a FeO distribution map made from Lunar Prospector data. It looks pretty similar to the Clementine map. And look at that dark red spot in the Ocean of Storms! That looks intriguing.

Where does this leave us?

This was a tough decision. Both sites are very similar. And both suffer from limited samples and a limited sample area (no rover on these missions). The processing and analysis of many samples is, at best, confusing. I feel like I need to look at all the data and analysis of each sample and put it all into a spreadsheet that I can understand. Talk about a project.

And honestly, I really thought about ditching both and heading into that iron hot spot deep in Oceanus Procellarum. But the limited information our physical samples provide us is better than no information at all (except remote sensing data that hasn’t been ground truthed yet).  Maybe next time.

Apollo 12 is the official Lunar Homestead Experimental Location. Why?

OK Statio Cognitum, let’s see how much we really know about you.