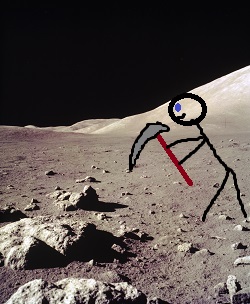 Hi there. Just wanted to let you know I’m still working on this project.

Work on the project today:

We can ignore the carbon dioxide and water vapor for now; they’re only present in small amounts. But the oxygen and nitrogen are massive problems. A standard pressure atmosphere with a 21% oxygen and 78% nitrogen mix (what everyone breathes at sea level) would be the most comfortable and healthiest for our Homesteaders. Unfortunately, there just isn’t much nitrogen to be found on Luna. So our Homesteaders will have to import A LOT of nitrogen from Earth to fill their Homesteads. This is a huge problem. On the flip side, we could breathe a 100% oxygen atmosphere at a much reduced pressure. Long-term exposure to this atmosphere presents some know medical risks as well as a slew of unknown ones. Grrrr. Whatever I end up choosing will probably be wrong in the long-run but I’ve got to nail these parameters down or I can’t move forward.