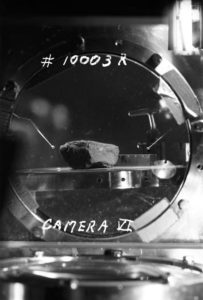 Lunar iron is the key to permanent, small scale settlements. At least that’s my hypothesis. Now I’ve got to prove it. The first step is to determine all the relevant properties of the iron we’re likely to find on the Lunar surface.

Sure, the Soviets brought back 300 grams of samples from the Luna 16, Luna 20, and Luna 24 landing sites. But Apollo returned 382 KILOGRAMS of rocks, dust, and core samples from 6 sites. Over 2200 individual samples overall. Fortunately, NASA has the data from the Soviet samples so I don’t have to hunt for it (or learn Russian!). It’s important to note that the returned samples don’t represent everything on Luna. There is a lot more left to discover.

One problem with relying on physical samples is that rocks can travel far distances on Luna. A high energy impact can send debris flying all over the place. A particular sample might not be representative of its current location. Not much anyone can do about this but it’s something to remember.