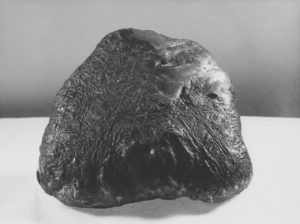 Lunar free metallic iron is the iron fines and chunks from iron-nickel asteroids that impacted the Lunar surface. It’s also the very small particles of pure iron created during meteoroid impacts, solar wind sputtering, and geological processes. It’s “free” because we won’t need to chemically release it from the rocks. All we need to do is pick it up with a magnet and separate it from the other stuff with it.

The sources of Lunar free iron include:

Iron from impacting asteroids is called “meteoritic contamination”. The last four sources, iron formed on Luna, are called “native iron metal”. It’s important to get the terminology right even though it’s often hard to distinguish between the two.

While we haven’t found any yet, there are sure to be large remnants of these asteroids buried under the regolith at some impact sites. And there could be layered ore deposits caused by iron settling out of magma (Lunar Sourcebook, 140). But they are not my concern. Future homesteaders and business enterprises will surely hunt these resources down and mine them. For this project though I’m only interested in the iron particles that are available to anyone with access to mare regolith. Highland regolith works also but contains significantly less iron.

I’m not going to detail EVERY characteristic here. That would be exhausting and unnecessary. There are really only a handful of things that will determine if Lunar free iron is suitable for pressure hull fabrication (the point of this whole exercise).

And just to clarify, this research does NOT include Lunar meteorites. Lunar meteorites, also called luanites, are Lunar rocks that were ejected FROM the Moon by a high-energy impact and landed ON Earth. It’s a bit confusing as you would think a Lunar meteorite would be a rock that hit Luna (which is what we’re after). But it’s not. For more information about luanites check out (www.lpi.usra.edu/lunar/meteorites). On the other hand, regular iron meteorites landing on Earth are very useful because they contain information about what the asteroids that hit Luna could have been made of.

Why Lunar free iron is so useful

This is simple. Luna has been hit by a lot of rocks over a very long period of time. Most of these impactors were rocky (although they probably contained some iron as well). But some were made of iron-nickel (FeNi). Most, or all, of the impactor vaporizes when it hits due to its high velocity. But vaporized doesn’t mean disappeared. All that metal has to go somewhere.

Lunar rocks are briefly melted by the energy of a meteorite impact. Here’s how iron is produced (Lunar Sourcebook, 154).

Subsolidus reduction simply means that a rock continues to chemically change when it’s solid but still hot (substantially below its melting point). According to Lunar Sourcebook, evidence for this is pretty common (Lunar Sourcebook, 147). The end product we’re interested in is the native iron  and iron minerals left behind.

This just means that molten rocks change their chemical structure as they cool. It’s been a long time since magma has flowed on the Lunar surface.